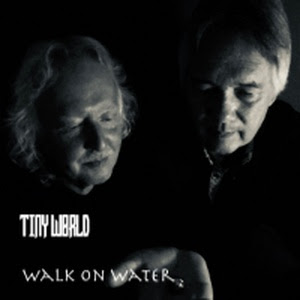 Tiny World is the band name, as well as the album title. Scott Duncan and Steve Petrey did all the writing, performance, production, and engineering. They've made music together for several years, both in studio and live productions. Scott began his solo musical career recording instrumental projects, writing music for Phil Ehart, drummer for the band Kansas. This led to 2 CD releases, "Contemporary Salon" and "Woodland", which both received worldwide critical acclaim and TV/Film soundtrack use, as well as much international NAC Radio play (New Adult Contemporary). Scott has continued writing for various publishers, most notably Zone Radio Imaging in NYC. Steve has been Tampa Bay's go-to guitarist for years whenever anyone needs live or studio guitar tracks. Some luminaries he has performed with extensively in their bands, both live in concert and in studio include Rick Derringer, Marty Balin of Jefferson Airplane, Captain Beyond, Dave Muse (Firefall), and one of the world's greatest bassists Jeff Berlin.

This new single was written upstairs in a coffee shop in NYC while ‘Gedalya’ was looking out the window. It’s got a good message about homelessness and he hope that it will spread some love and kindness in the world. Discover ‘Who Cares About Me’ the 31st May in o

‘PantherWolfe’ is meant to be raw, stripped down synthwave. The genre, at outset, embodied the spirit of possibility and promise that any vision of the future holds. Discover ‘Smirk’ the 31st May in Formula Indie

‘James Bene’ is making a splash in the indie pop scene. He is releasing his 3rd single “Mountain’ in April and there already is a buzz. He is a singer/songwriter who wishes to inspire change with his music, writing about his real life experiences and challenges. “Mountain” is moody, haunting and gives an Evanescence vibe. It is..at its core, about overcoming childhood sexual abuse using an alternative pop canvas.

The Full-Length Sophomore Album “THE ABBY ROSE”Impact Date: May 24th, 2022 On the heels of the award-winning debut album, “Echo Chambers”, Multi-Instrumentalist, DJ, Producer, Composer, Engineer & Winner “Best Drummer”. Policy will release his second full-length album, “The Abby Rose”, coming May 2022. The full-length LP features tracks of Pop, Alternative, EDM, Hip-Hop, and Electro Pop music with talented collaborators from around the world. Discover ‘Policy’ with ‘Trick my heart’ the 31st May in Formula Indie