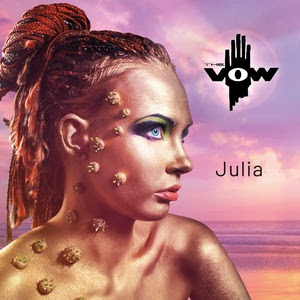 Genesis The Vow was formed in September 1989 around singer / songwriter Graham Trust. Previously members of Liverpool post punk 3 piece No Exit, Trust and lead guitarist Martyn Gilbert were joined on drums by Tony Potter, on bass guitar by Paul O’Brien and on vocals by Jacqui Lancaster. The Vow gave themselves 2 years to secure a record deal. By autumn 1990, it was decided a change of direction was required and a more raunchy, rockier style was adopted. Lancaster and O’Brien left the group and Nick Reynolds was drafted in on bass guitar. By Autumn 1991, having received only luke warm record company interest, The Vow had run its intended 2 year course and duly disbanded. Rebirth Motivated by the death of his organist / choirmaster father, Eric , and after a 13 year hiatus, Graham began writing once more in 2006. From this point onwards, his lyrics focused on themes of infinity, the transcendental and the fey. By the Summer of 2008, he’d written enough songs to fill an album, which had been intended to be a solo acoustic effort. However, when recording commenced in August 2008 at Parr Street Studios in Liverpool, he had been joined once again on lead guitar by Martyn Gilbert. Tony Potter flew in from his home in the United Arab Emirates to lay down drums on 12 tracks in a 2 day session in March 2009. Guy Davies played keyboards and co-produced, with Andy Strange, the band’s first commercial release in 2011 – the classic Spacedust EP. Thereafter, the 3 founding members continued with the album project. Mike Smith was drafted in on keyboards, and The Vow’s first album ‘For a Dreamer‘, was finally released in March 2012. It’s opening track “A Walk in the Sunshine” was selected as the single. New Material 2013’s “Bluer Than You” consisted of several tracks not considered appropriate for their occasionally melancholic debut album. Here, there are re-workings of old Vow rockers like “Free the World” and bright, catchy ditties like “Someone to Talk To“. Amongst the new songs was the single “Falling Stars“. “You Are?“, released in 2014, consists of newly re-recorded old Vow songs (I’m Over You, Flunky and Coal Fire) and new material, including the title track – “You Are“. Their 2015 album “Ghost Writer” consists mainly of old Vow and old solo Graham Trust recordings from the ’80s and ’90s, all greatly enhanced for the 21st century. The only brand new song, “Ghost Writer” (about a romantic liaison with a dead Victorian authoress) was chosen as the single. 2017 saw the release of a new single “I am immortal” / “Je suis immortel” which is a tribute to the deceased French racing driver Jules Bianchi. The Grammy award winning producer Ken Lewis was involved with this one. The track appears on the compilation album “Free the World“. During 2018 two more new songs were released: “All the other boys” which concerns the so called Universal Laws which feature in the book and film of The Secret. The track appears on the eponymous compilation album “All the other boys“. “That’ll be the day” is as sweet a ballad as The Vow have ever produced. It concerns an elusive love affair which can never be. Graham explained that “it’s more than just a song – it’s real. There are only 3 other songs I’ve ever written while fighting back the tears – “Spacedust (outro)“, “Heaven won’t hold me” and “To the End of The World“. “That’ll be the Day” opens the band’s “Love” compilation album followed by a reworking of “Caroline” accompanied by Simon Denny’s string arrangement. The Future Three more new songs are expected in the summer of 2019. “Madrid” is the most up tempo song The Vow have recorded so far (164 bpm for the aficionados). Its fundamental message is that it doesn’t matter to which beautiful place you travel, you can’t run away from yourself. “Venus Girl”, which is also up tempo was initially inspired by the title of a book “Men are from Mars…Women are from Venus“. It’s essentially a love song with a semi science fiction / fact theme plus a few Shakespearean allusions – “…my mind’s eye” and “…the stuff that our dreams are all made of.” Finally, there will be “Julia 1984” which explores the feelings Winston Smith had for Julia in George Orwell’s classic novel “Nineteen Eighty Four“. Watch this space for the eventual EP. The Vow hope also to release a “Best of” compilation some time in 2019 to celebrate the 30th anniversary of the band’s formation.

This new single was written upstairs in a coffee shop in NYC while ‘Gedalya’ was looking out the window. It’s got a good message about homelessness and he hope that it will spread some love and kindness in the world. Discover ‘Who Cares About Me’ the 31st May in o

‘PantherWolfe’ is meant to be raw, stripped down synthwave. The genre, at outset, embodied the spirit of possibility and promise that any vision of the future holds. Discover ‘Smirk’ the 31st May in Formula Indie

‘James Bene’ is making a splash in the indie pop scene. He is releasing his 3rd single “Mountain’ in April and there already is a buzz. He is a singer/songwriter who wishes to inspire change with his music, writing about his real life experiences and challenges. “Mountain” is moody, haunting and gives an Evanescence vibe. It is..at its core, about overcoming childhood sexual abuse using an alternative pop canvas.

The Full-Length Sophomore Album “THE ABBY ROSE”Impact Date: May 24th, 2022 On the heels of the award-winning debut album, “Echo Chambers”, Multi-Instrumentalist, DJ, Producer, Composer, Engineer & Winner “Best Drummer”. Policy will release his second full-length album, “The Abby Rose”, coming May 2022. The full-length LP features tracks of Pop, Alternative, EDM, Hip-Hop, and Electro Pop music with talented collaborators from around the world. Discover ‘Policy’ with ‘Trick my heart’ the 31st May in Formula Indie