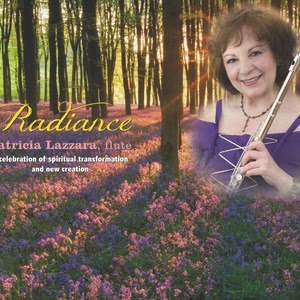 “Radiance” is the 9th studio album by Patricia Lazzara featuring Patricia Lazzara, flute; Steve Markoff, alto flute; Kristin Johnson Dabaghian, piano; Darren O’Neill, guitar; Jessica Davila, soprano; Kristy Chmura, harp; and Gerall Heiser, cello. Containing several world-premiere and commissioned works by Grammy-nominee Ron Korb and Dmitriy Varelas, the album also contains works of other living composers such as Latin Grammy winner Carlos Franzetti, Maurizio Balzola, Gary Schocker, Daniel Dorff, and the only recorded version of Astor Piazzolla’s “Oblivion” in Italian at the time of recording. Patricia Lazzara, has distinguished herself as a soloist, chamber and orchestral musician. A 3-time winner of the Artists International Competition, she has performed at Carnegie Hall several times and at the Kennedy Center in Washington DC. She is a Winner of the Florida Flute Association Performers Grant for Advanced Study and a Winner of the National Flute Association Convention Performers Competition. She is a founding member of Light Stream Orchestra (LSO), an ensemble that focuses on meditative music inspired by Spirit. LSO utilizes a multimedia approach to performances with sound and added visuals to enhance audiences’ experience. She is also a founding member of UpTown Flutes, a flute choir group performing across the U.S. Ms. Lazzara travels to Italy to organize and perform at the Assisi Performing Arts Festival in Assisi where she has performed several World and European Premieres of works.