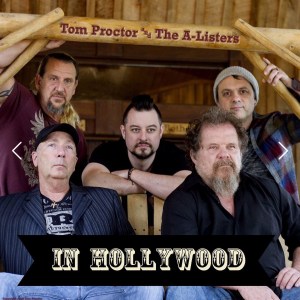 No stranger to the stage and screen, one of the “Guardians of the Galaxy”, Tom Proctor released his singing/songwriting album debut entitled, “Working Man” worldwide on June 15th, 2018. The album was recorded at the famous Dark Horse Recording Studios, home of artists such as Taylor Swift, Matchbox 20 and Tim McGraw, among others. The album is a conglomerate of story-telling majesty, heart-filled passion, and orgasmic drama, from a man that’s lived a fast and furious life thus far. Tom Proctor can tell you tales of his life for the next 30 years without taking a breath. He’s been a stuntman, has trained horses, has been in over 250 full contact fights and aside from films has also appeared on several TV shows. His love for song and story began at a young age through encouragement from his grandmother Marie. Although he played the drums already, after winning a guitar in an arm wrestle he realized the calming effect of the strings. Many of his songs are written on a whim or in a dream, or through a psychic revelation. Most have a tale behind the story of the song, and all are genre defying. The A-Listers are Billy “Thunder” Mason, Geoff Butterworth, Mark Corradetti, and Mark Thomas. A group of seasoned, talented musicians who have worked with the biggest names in the history of music, and have collectively worked with Tim McGraw, George Strait, Luke Combs, Zakk Wylde, Travis Tritt, Martina McBride, Tanya Tucker, Florida Georgia Line, and many, many more. Tom Proctor and the A-Listers are getting ready to take the Country Music world by storm.