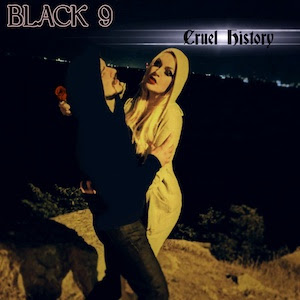 It all began with Aven and Blakk... Singer song writer's and multi instrumentalist Aven and Blakk have worked together on numerous projects, that have circled the globe in many different genres and styles. They had a bunch of hard hitting tunes such as "Friend's", "Dark of the Night" and decided to explore where it would take them. As a result of this journey, they took a deep look into their experiences and hardships that made them who are today. From there it just snow balled into "CRUEL HISTORY" the full length album. Morphing into BLACK9... Aven and Blakk realized they had something special and organically NuMetal, yet still held on to the lead/solo guitar work that set's them apart from their piers such as: "A Perfect Circle, Tool and Eavenessence". Add in influences such as "Metallica, Megadeth and GRN" and you have BLACK9. Add TIffany Marsten and her "Malmsteen" like edgy solo's and it speaks for itself. CRUEL HISTORY The result of the break down of society and personal experiences, while searching for meaning in a world where honest music has to happen and with CRUEL HISTORY you get just that. Real music, real musicians in art. “I really like you’re songs” -Rodney Bingenheimer “I haven’t heard anything like you guys in the last decade! You have that big quality like Guns N’ Roses” -Crew Management “Great album, fresh and Now!” -Kevin Williams (Metallica’s Mastering Engineer) “Great songwriting! Powerful voice!” -Edge 102 “Sounds like Anne Wilson of Heart!” -Rob Losh (Festival Organizer for Musicians Unite for Veterans