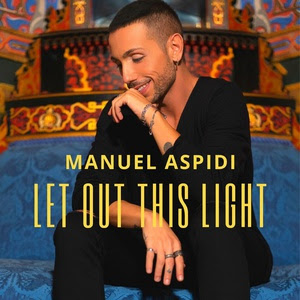 MANUEL ASPIDI BIOGRAPHY MANUEL ASPIDI was born in Livorno (Tuscany - Italy) in 1987. He began studying singing at the age of 6 and, only 15, he was already the winner of numerous singing competitions. In 1999 he began studying light music (Pop - Blues - Soul) and, at the same time, he starred as a protagonist in the panorama of opera music. He is the first dramatic tenor in the choir of the Maestro Precious interpreter of operas including Beethoven's Ninth, Madame Butterfly, Carmina Burana, Vivaldi, Don Pasquale and Norma, taken on tour in theaters throughout Italy. In 2006, nineteen, he joined the cast of the VI edition of the Talent Show "Amici" by Maria De Filippi on the Mediaset TV broadcaster. The unpublished "Soli a metà", interpreted by him, is stationed for 4 months at the top of the charts, becoming a summer hit. It is the first successful new program and receives 2 Gold Records and the Platinum Disc. He then recorded the song "Not like me" a piece at the center of a service realized by Verissimo transmission of Canale 5. In 2010 he recorded his second unpublished work in Italian "Che Senso Ha", written by Niccolò Agliardi which earned him good air play on the radio. In 2011 it was the turn of the third single entitled "Non ci aspettiamo più", again from Agliardi. In 2012, Edel released the single "Notte di luglio", written by Pierdavide Carone. In 2016 he presented himself at the blind auditions of The Voice of Italy with the song "Love Runs Out" by One Republic. All 4 coaches turn and Manuel, among them, chooses Raffaella Carrà. At the knockout episode, the coach Raffaella Carrà decides, between the disapproval of the audience and the viewers, to end the path of Manuel, who performs interpreting Areosmith's "I don't wont to miss a thing" and leaving the talent between applause heard from the public. The video of that interpretation in just 8 days reaches 100 thousand views on YouTube . In May 2018 it records the song "L’uso delle mani" (https://www.youtube.com/watch?v=aHApNb5Ca64) dedicated to all the women victims of femicide. The video of the song totals over 1 million views, exactly one million hundred thousand, demonstrating that Manuel is followed and loved by many fans. The 2019 opens for Manuel with an ambitious project of international breadth, enclosed in the EP entitled "Libero (I'm Free)", which the singer introduces to the public with the launch of the single "Un angelo per me": released on January 24, 2019 it has totaled over 300 thousand views on the artist's Youtube channel. The latest success, in chronological order, is the video of the single "Libero (I'm Free)", which gives its name to the EP: released on April 8, 2019, in less than a month it has exceeded 17 thousand streaming over Spotyfy and has recorded over 250 thousand views on the singer's Youtube channel, managing to climb, day after day, the national independent air play ranking. On May 19, 2019 the EP is released with the title LIBERO (I'M FREE) containing 6 tracks. The EP immediately received a huge success coming to exceed the short time over 110,000 Spotify streaming. In addition to the fans, literally delirious for Manuel - on the Social Networks they wrote so many comments, all positive - the single was greeted with enthusiasm by Mickey Feat, Julian Victor Hinton (British author, arranger and producer who collaborated with names like Robbie Williams, Trevor Horn, Seal etc.)Alan Clark and Phil Palmer, - historical columns of Dire Straits - and by the wife of the latter Numa Palmer, who also oversaw the production, musical composition and arrangements and who, in a dedicated video clip, highlighted Manuel's extraordinary vocal abilities. SAY ABOUT HIM: His warm, soft, enveloping and at the same time scratchy voice resembles that of Alex Baroni (Italian artist who died a few years ago in a car accident), but also has many similarities with the vocal nuances of Stevie Wonder.

‘Chic Chameleon’ has performed at many venues in Edmonton including The Station on Jasper, The Buckingham, The Avairy and Polar Park Brewing CO. Chic Chameleon’s first official single release, ‘Dreaming of Heaven’ will also being featured in a movie produced by the GIFT (Girls in Film and TV) organization, also based in Edmonton. To top it all off, Chic Chameleon’s debut EP comprised of four songs came out on March 25, 2022 and is available on all streaming services. Discover ‘Noble Lies’ the 5th July in Formula Indie

This latest single from ‘Chucky Trading Co’ is a country rock song that tells the story of a down-on-his-luck Nashville star. Discover ‘Shadows’ the 5th July in Formula Indie

Toronto-based indie pop duo, ‘All the Racket’, are set to release their Single, “Memory,” out April 18th. “Memory” will be released following a set of Singles over the past few months from members Phil McIndoe and Ramin Mirzaei. Discover that the 7th July in Formula Indie

Discover ‘Dreamscapes’ by ‘SonoMancer’ the 7th July in Formula Indie and enter in a wonderful new universe!

‘Crack a Smile’ by ‘Saticöy’ is an aural projection of confidence. The perfect soundtrack to that moment when all those risks and hard work start to pay off, and you can’t help but smile.Impassioned male vocals shattered by distortion, hard hitting synths, lush guitars, and high energy drums carve “Crack a Smile” a unique space in the crossroads of Pop, R&B, and Rock. With an EP of the same title coming right around the corner, the song seems to reflect the bands excitement of what’s to come. Discover that the 5th July in Formula Indie