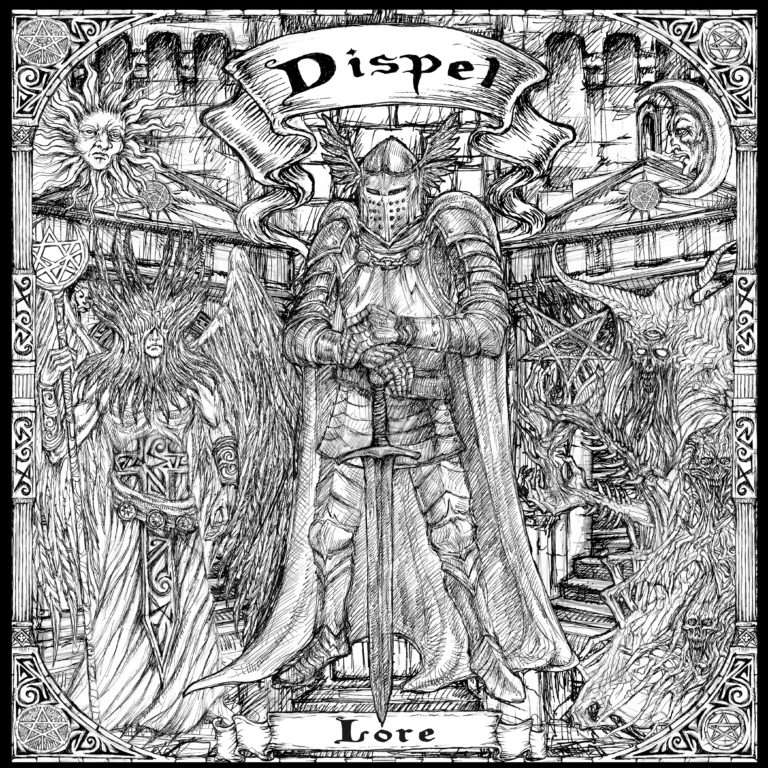 Dispel’s sound is laced with dark electronic melodies, vocal hooks and praising spiritual quests through driving beats and oscillating keyboards. Together, they seek to create a musical narrative praising historic lore, mythology and mysticism. This album was produced by Mike Textbeak, a Cleopatra Records artist (as TEXTBEAK) and early DJ from the Witchhouse scene. He has worked with an impressive line-up including legendary producer John Fryer, Mark Stewart, Bestial Mouths, Peter Hope, Cyanotic, Vaselyne and Searmanas, to name but a few. An expert in underground music, he hosts the weekly CXB7 radio show on Hexx 9 Radio. ‘Lore’ album pre-order https://www.dispelmusic.com/Album Comprised of nine tracks, this album was mastered at The Cage Studiosin Coventry, UK by Martin Bowes of Attrition, well known for his work with Nine Inch Nails, Psychic TV and Steven Severin of Siouxsie & the Banshees. Founded by Scott Dispel, Dispel is a trio comprised of Scott Dispel, Ravensea and Sean Gallows. Scott Dispel was a founding member of the old school hardcore band Face Value and is also currently the drummer for TEXTBEAK. A studio engineer and producer, in 2005, he was voted Cleveland’s best nightclub DJ by Scene Magazine. “Modal Consequence is about the Threshold stage of the Heros’ Journey. This is the moment where the Hero/Heroin takes that first step into that dangerous realm of the unknown. Leaving the comfort or stagnation of their known limits. It’s an important step to growth, but the journey will be full of unknown and often descisive challenges,” explains Scott Dispel. “Ravensea sings the Chorus “My bones they scream with warning…” Encouraging and preparing our Hero for the trials ahead… We hope to inspire others to take the first step to “attacking their destiny” to becoming the best versions of themselves and in having the courage to strive for achievement, despite the unknown challenges that will surely arise”. Dispel’s music is inspired by such artists as Sisters of Mercy, Bauhaus, Clan of Xymox, Depeche Mode, VNV Nation and Blutengle on the one hand and Delerium, The Misfits and The Cramps on the other. Dispel has unlikely roots in the early 90’s hardcore punk scene while founder Scott Dispel was drumming for Face Value. The dues were paid, gear was hauled, road miles travelled and endless van breakdowns followed. While on tour, a seed was planted in an underground goth-Industrial club in Berlin. Exposed to a new sound and different culture, this experience made a lasting impression. Though the raw truth of the punk scene remained, it was clear that electronic music was the next chapter and that this required a fresh approach. After completing a degree in music and recording studio internship, Scott Dispel’s commitment to the art of music was solidified. Feeling the local underground scene was sorely lacking and inspired by Fantasy gaming, mythology and mysticism, the foundation was set. Fate again intervened when he met Ravensea, a Berklee Vocal Performance / Music Therapy major, offering a powerful voice and insight to the secret of music’s transcendence of language and cultural barriers. This secret is a revelation, so pure, simple and true… “Music is an integral part of our emotional lives.” The new Medieval-based video for ‘Modal Consequence’ was directed, filmed and edited by Rafeeq Roberts. Scott Dispel fills the role of the Plague Doctor, Mystic & Black Knight. Ravensea appears as herself. Jennifer Haney plays the Sorcerous, as well as handling make-up and wardrobe. Levie Mckenzie plays the Crusading Knight, in addition to handling armor, weapons and fight choreography. As of October 31, ‘Modal Consequence’ will be released digitally via Dispel’s website and Bandcamp, where it will be offered as a free download. The full ‘Lore’ album will be released on January 10, available on vinyl and CD, as well as digital download. It can already be pre-ordered via the artist’s website.