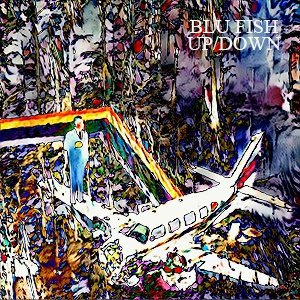 Blu Fish is an psychedelic indie rock band from West Auckland, New Zealand. Consisting of Cameron Mason McCurdy (Vocals/drums/trumpet), Mitchell Baber (Vocals/guitar), and Josh Rundle (Bass).   After playing gigs together in separate bands throughout high school, Blu Fish formed at the Auckland University bar on the first day of uni 2018, and already had a gig confirmed before they had written any songs. They quickly wrote, recorded, and released their debut 5-track EP, Shments, 9 months after forming as a band. Lead single, “The Party”, currently has over 18k plays on Spotify. After winning the 2018 NZ National Battle of the Bands competition, the band recorded their new single with Grammy-nominated producer Steve James at Red Engine Studios in Brisbane during their tour of New Zealand, Australia, The Philippines, Hong Kong & Singapore. The new single “Up/Down” deals with euphoria/dysphoria, feeling wired/in a void. It's about experiencing the manic depressive nature of being in a creative industry. And also pays homage to the late West Auckland band Heroes for Sale's track I Wish You Knew Jim Morrison – the song that inspired the band to start making music when they were in high school.