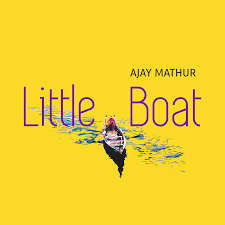 M&F Worldwide Promotions present Ajay Mathur’s 2nd single from his album, “Little Boat”.  “My Wallet is a House of Cards” has been wildly successful and is now officially nominated for the 36th German Rock & Pop Price 2018 in the ” Singer/Songwriter” category. M&F Promotions have been privileged to work with Ajay these many years.   He is an inspiration for all indie artists in that Ajay understands the process of a deliberate method and the perseverance involved to be successful. It doesn’t hurt to be hugely talented either! Ajay Mathur is a citizen of the world and as such his musical interests and points of reference are much wider and more varied than most artists. That he was born in India but now lives and works in Switzerland explains a lot about his music as the same collision of worlds can be heard within it, the west meeting the east, occident embracing orient. But it isn’t just geography that is being crossed here but genre as well as he deftly weaves pieces of pop with rock, blends of eastern instrumentation and western folk traditions, loose psychedelia with rigidly structured grooves and plunders the past just as much as he looks to the future.   The real charm of Mathur is perfectly summed up on his latest album Little Boatwhich, even though it covers a lot of ground stylistically, from the late-night jazz vibes of “Grooving In Paris” to the retro-folk-pop of “While I’m Standing Here” to the incendiary blues stomp of “Wallet is a House of Cards”, it has a wonderfully cohesive quality. Each song within, no matter where it leans generically feels like a necessary part of the whole album, a chapter in a musical story that might be filled with different characters, scenes and scenarios but which is unmistakably written in the same recognizable creative handwriting. Like the man himself, the album travels well, carrying just the essentials and unburdened by unnecessary baggage so that it is ready to head off on any unexpected exploratory tangent as the desire takes it. They say it is better to travel well than to arrive, so why not join his sonic journey and travel in style.