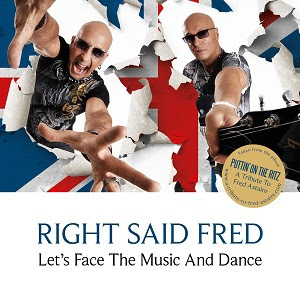 Right Said Fred is a British band based in London and formed by brothers Fred and Richard Fairbrass in 1989. In July 1991, the group released its début single, "I'm Too Sexy". It was a huge hit in the United Kingdom, spending six weeks at number two in the charts. The song also went to number one in 32 countries including the United States where it topped the Billboard Hot 100 chart. Right Said Fred went on to have a number one single on the UK Singles Chart with "Deeply Dippy" in April 1992.The group has achieved multi-platinum status and has also won two Ivor Novello Awards – for "I'm Too Sexy" (1991) and "Deeply Dippy" (1992). In 1993, Right Said Fred was nominated for the Brit Award for Best British Group. "Let's Face the Music and Dance" is a song written in 1936 by Irving Berlin for the film Follow the Fleet, where it was introduced by Fred Astaire and featured in a celebrated dance duet with Fred Astaire and Ginger Rogers. The new version of this classic song was recorded in summer 2017 in London for the album “Puttin´ On The Ritz – A Tribute To Fred Astaire” produced by Rainer C. Regatschnig, Justin Fidèle and Wolfgang Lohr.