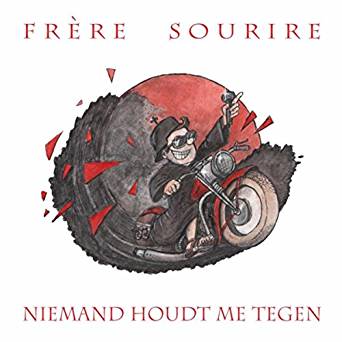 Bio FRÈRE SOURIRE 12/2018 Frère Sourire is the artist name of Filip Steeno. Between 1980-1996 Filip was a successful drummer who played in different bands in different rock styles: punk rock, folk rock, pop rock, straight rock. In 1988 he worked as a session drummer for Levian, folk rock à la Paul Simon and recorded the EP ‘Interiors’. This EP had a lot of airplay in Belgium, France and Switzerland. The band is now known as Café Noir. (https://youtu.be/3tuqXh_ySLQ) From 1989 until 1991 Filip was drummer of the band The Sam Cooke Singers and had a #1 hit in the charts of Studio Brussel, the alternative rock radio station of Belgium, with the song ‘So Sad...’ (https://youtu.be/uEC2KliyWpQ). They had a record deal with EMI Belgium but EMI asked them to change the name. It became The Sunriders. With The Sunriders Filip had a hit in summer 1991 with ‘Down on my knees’, (https://youtu.be/kAJGdym6Ojo). This band split one year later. EMI asked Filip to become the drummer of a new project Eli Jones, fm rock à la Bryan Adams, Bruce Springsteen... He recorded 3 singles with Eli Jones but never had a breakthrough and the band split. (https://youtu.be/pCcLft80oVE) In 1996 Filip saw the Light, quit his job, entered the monastery and became a monk of the order of Saint Benedict. After his studies of philosophy and theology he was ordained priest on February the 17th 2007. During this ceremony he played the drums with a few fellow musicians. (http://www.freresourire.be/images/drums_prwijding_2007.jpg) But his real dream of becoming a musician was never far away. After years of living in silence in the monastery, he began writing songs. Together with his old friend and producer Wim Claes (songwriter of f.i. Kim Kay – Li La Li) he wrote a song for the soccer team OHL (www.ohl.be) of his hometown Leuven. With his new artist name Frère Sourire, this song ‘‘t Spel van OHL’ (the game of OHL) was released on may the 1th of 2015 and had immediately a lot of media attention in Belgium. (https://youtu.be/A4S5C40k67c). Frère Sourire has now released a new song ‘Niemand houdt me tegen’ and the video reached already +10.000 views without any airplay. (https://youtu.be/yD6xHZLXgS0) www.freresourire.be