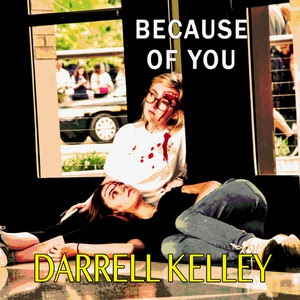 Speaking from ATLANTA where he is putting the final touches on his latest music video, Kelley talked about making a difference. He hopes the new single, “Because of You,” helps prevent senseless gun violence by spreading the word. “We need better laws in order for our children to be safe here in America,” he said. His message has resonated with listeners - “Because of You” has already been streamed over 35,000 times on SoundCloud since its release less than a week ago. A young man was interviewed on CNN about another shooting. Kelley heard him ask the NRA “What are you going to do about this? Are you going to wait until somebody else gets killed?” That really touched Kelley who takes the loss of life very seriously. He wrote an emotional and serious song to bring people together to fight for tougher gun laws that protect the public. Kelley said “I think America can be and should be a safer place to live because we have a beautiful country.” Some argue with Kelley that stricter laws would take guns away from responsible citizens. To them, he says “You’re missing my whole entire message. I’m not against the right to have a weapon. If someone breaks into your house or tries to rob your business, you are supposed to be in a position to protect yourself.” For Kelley, the issue is keeping guns out of the hands of the wrong people. Over the years, Kelley has lost family members to natural causes. At this time of year especially, he feels the pain of their loss and sympathizes deeply with those who mourn for family lost to gun violence. “Imagine how these people feel during the holiday season when they don’t have their little girl who got killed because of gun violence,” Kelley said. “A lot of people are not going to be with their loved ones because they got killed.” As a singer/songwriter, Kelley has achieved chart successes with several singles, a number of albums and an EP. In 2018, he released his debut R&B/Gospel EP, “Storm is Coming.” In Early 2019, Kelley dropped his first full length album, “Unity,” followed by the album “Here Ends the Lesson.” His latest album, “Get Wild,” featuring “I’m So High,” has captivated listeners since its release earlier this year. Kelley is also the author of “The Book of UWGEAM” which explains the principles of the religion of UWGEAM (an acronym for God of the Universe, God of the World, God of all Gods, God of Everything, and God of Anything including Me), which he created. An entrepreneur who likes to keep busy, he is also the owner of Soul Delicious restaurants in Miami and Morrow, Georgia. Darrell Kelley uses his unique talents to create music about things that matter in people’s lives, and he writes about the way the world is to help all the people who are hurting. “I care about people in general,” Kelley said. “I believe we are all from the same place and that God and I love everybody regardless of who they are.” To join Kelley in his fight against gun violence, visit Kelley’s website, to sign the Change org petition and download “Because of You.” Part of the proceeds from the new single will be donated to the families of gun violence victims and to groups advocating against gun violence.