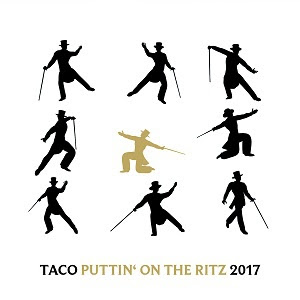 "Puttin' On The Ritz" is the title of an American jazz standard released by Irving Berlin in 1929. Thanks to the eponymous 1930 film, it's a song that everyone knows. Dance and film legend Fred Astaire first recorded it in 1930, securing the song's status as an evergreen in the 1946 film "Blue Skies". In 1982, Dutch singer Taco recorded an elaborate, synth pop version of "Puttin' On The Ritz" that sold more than a million copies in the US alone, hitting number 4 in the Billboard charts. To celebrate the 35th anniversary of his global success, cult singer Taco is launching his comeback with an electro swing reboot called "Puttin' On The Ritz 2017". "I had so much fun re-recording this classic tune, and the new electro swing sound is appealing to many generations. A few days ago there were a couple of kids at rehearsals. They were really enthusiastic and said the sound is totally cheedo (cool). I can't wait to hear what everyone thinks," says Taco excitedly. Jordan Fisher and Lindsay Arnold won the 25th season of "Dancing with the Stars" performing a freestyle routine to "Puttin' on the Ritz 2017 (Jazzy Radio Mix)" by Taco Ockerse feat. tomX. At the end of that week the single charted #1 on I-Tunes in the USA easy listening top 100.