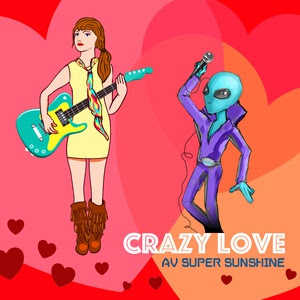 AV Super Sunshine’s latest single, ‘Crazy Love’, is a first class example of what his ‘modern classic rock’can sound like, a genre he’s inventing with the help of mega-hit maker Michael Bradford (Wikipedia). “We were charting a few years back on the College Radio charts next to a band called The 1975.” AV explains, “I went and checked out their songs. They sounded cool but they didn’t sound like 1975. 1975 was a year for glam rock with hits like ABBA’s ’S.O.S.’, Aerosmith’s ‘Walk This Way’, Bowie’s ‘Fame’, Mud’s ‘Tiger Feet’, Queen’s ‘Killer Queen’and The Sweet’s ‘Ballroom Blitz’. I remember thinking, I wish I could show the kids what 1975 really sounds like, so I started writing”. AV wanted ‘Crazy Love’to be exciting and work on both pop radio and the dance floor, so he reached out to Michael to help write it. AV remembers, “While listening to the song demo, Michael heard Roxy Music’s ‘Love Is The Drug’, another great hit from the year 1975. I focused on a universal lyric, like a Bowie or Queen song, a lyric free from gender reference so the song could be as universal and inclusive as possible. I also wanted to cross a few language borders so I added the French Valentine lyric” The finished outcome is a song that is just as relevant today as in 1975. When ‘Crazy Love’is spun on year 2020 hit radio, it compliments any current song such as by Billie Eilish, Imagine Dragons, Jonas Brothers or Panic! At The Disco. We think you will agree which ever mix you spin that ‘Crazy Love’is the perfect track to help jump start another year of radio love as well as a great song to build to Valentines Day 2020 and beyond. Credits: AV Super Sunshine (lead vocal), Michael Bradford (Moog,bass,background vocals, drum programming), Michael Ezra Bradford (drums, percussion). Both mixes were produced, engineered and mixed by Michael Bradford at Chunky Style Music, Los Angeles. Mastering was done by Andy VanDette Mastering, New York City.